In September 2022, the government announced a series of measures that constitute its housing plan. Among them was an increase in the investment threshold for Golden Visa permits, from €250,000 to €500,000. Said measure purportedly aimed at increasing the amount of property available for Greeks.

The Golden Visa programme was launched in Greece in 2014 and provided for the granting of a five-year residence permit to third-country nationals, on the condition that they purchase real estate worth at least €250,000. The residence permit is granted to the investor and his/her family members and allows free movement within the European Union and the Schengen Area. After five years, investors are able to renew the permit.

A five-year residence permit is also granted to third-country nationals for investment activity that “will have a positive impact on national development and economy”. In this case, 10 persons including the investors are able to enter and reside in the country. Finally, beneficiaries of the Golden Visa programme are those who “make an intangible investment in Greece in specific forms of securities or a bank deposit exceeding the value of €400,000, either as individuals or through legal entities”.

The “golden programmes” are not a Greek novelty. Similar programmes in Europe have been providing residence permits to third country nationals since the mid-90s. Great Britain was the first country to introduce the Golden Visa programme in Europe, as early as 1994.

In a scientific article published in 2021 by Kristin Surak and Yusuke Tsuzuki from the London School of Economics and Harvard University, they point out that Golden Visa programmes that grant residence permits are usually launched in times of economic recession. The governments that implement them can be either left or right-wing, and the researchers note that opposition parties do not discontinue these programmes when they come to power.

For their part, investors interested in the “golden programmes” seem to choose countries based on tourism criteria rather than on quality of education, health care, air pollution, etc. This shows that investors see themselves primarily as tourists who often travel for business and leisure purposes.

Today, similar programmes are attracting investors in Spain, Malta, Portugal, Latvia, Bulgaria, Cyprus, etc. In some cases, the governments of these countries do not just grant residence permits but also citizenship, raising the political and ethical question of whether citizenship should be a redeemable commodity. Greece does not currently provide Greek passports through the Golden Visa programme. 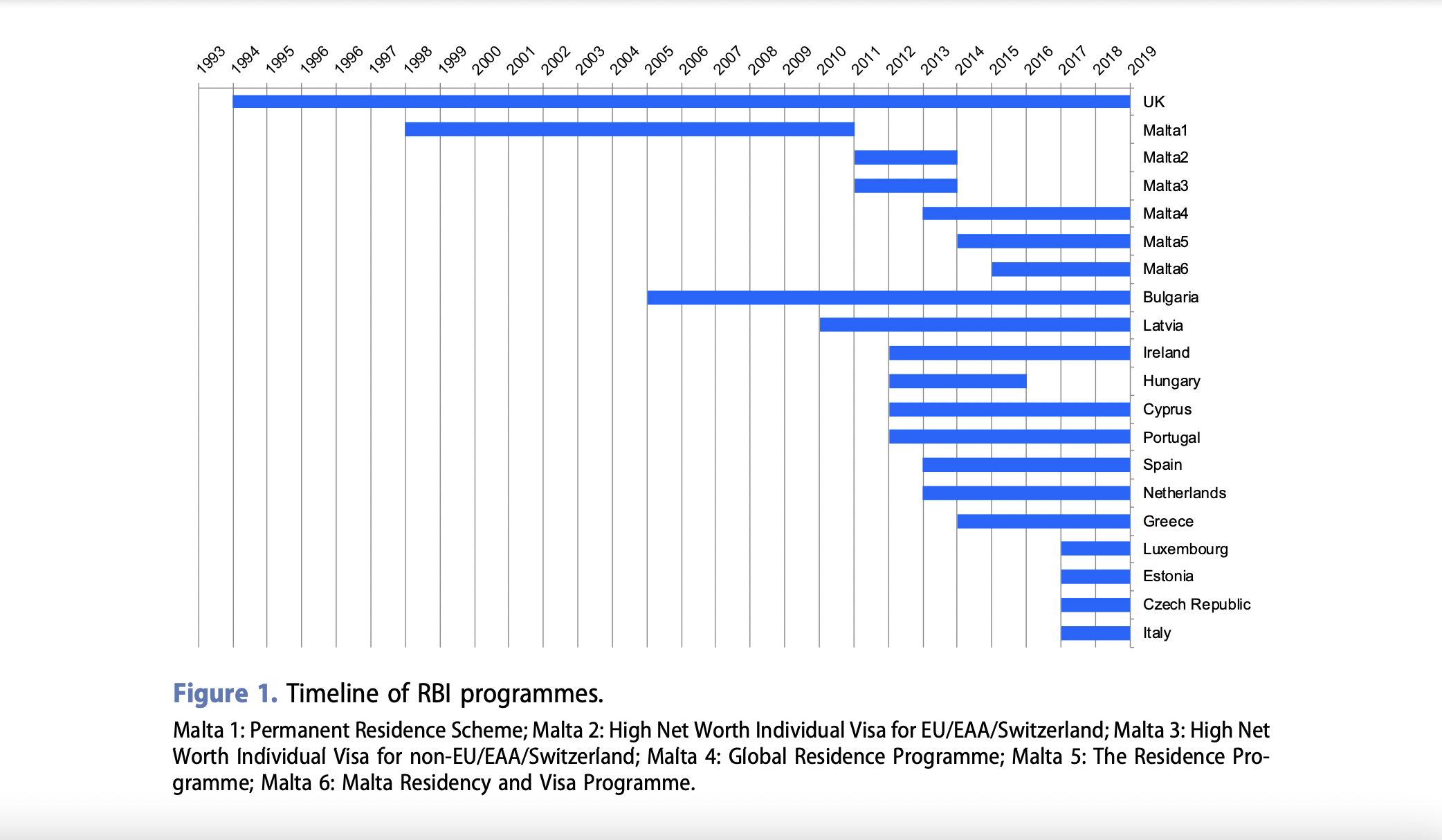 Until recently, Greece offered one of the cheapest Golden Visas in Europe. This was one of the main reasons why the country received the most applications from investors in Europe. More specifically, according to Surak-Tzusuki’s research, up to 2019, Portugal, Spain, Latvia and Greece cumulatively, were responsible for 70% of the approved Golden Visa applications in Europe, while their programmes generated 60% of the revenue from such programmes across the continent.

Greece in particular, in the first 5 years of the programme’s implementation (2014-2019), approved 20% of the Golden Visa applications in the European Union and generated 10% of the total revenue from its respective programmes. 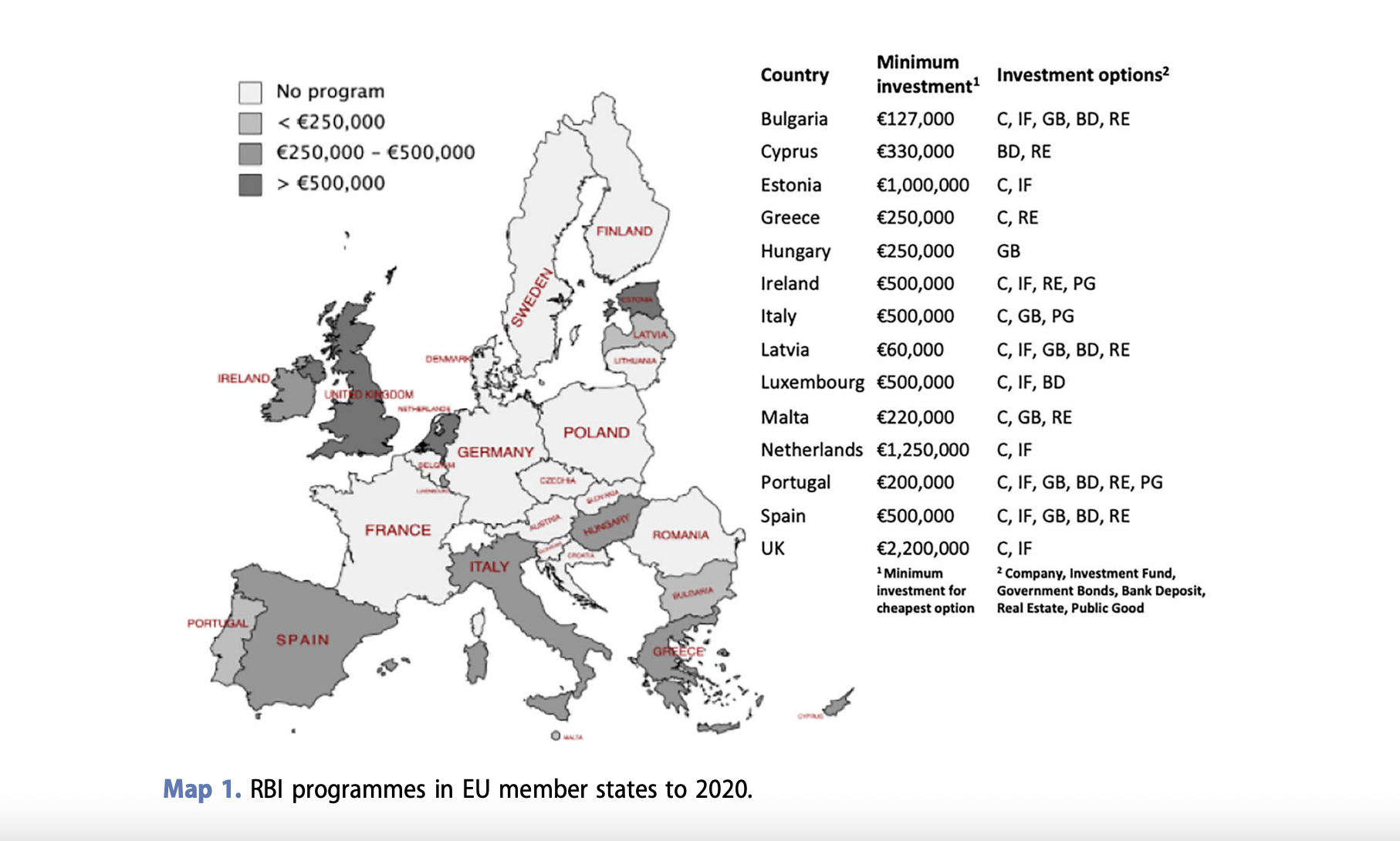 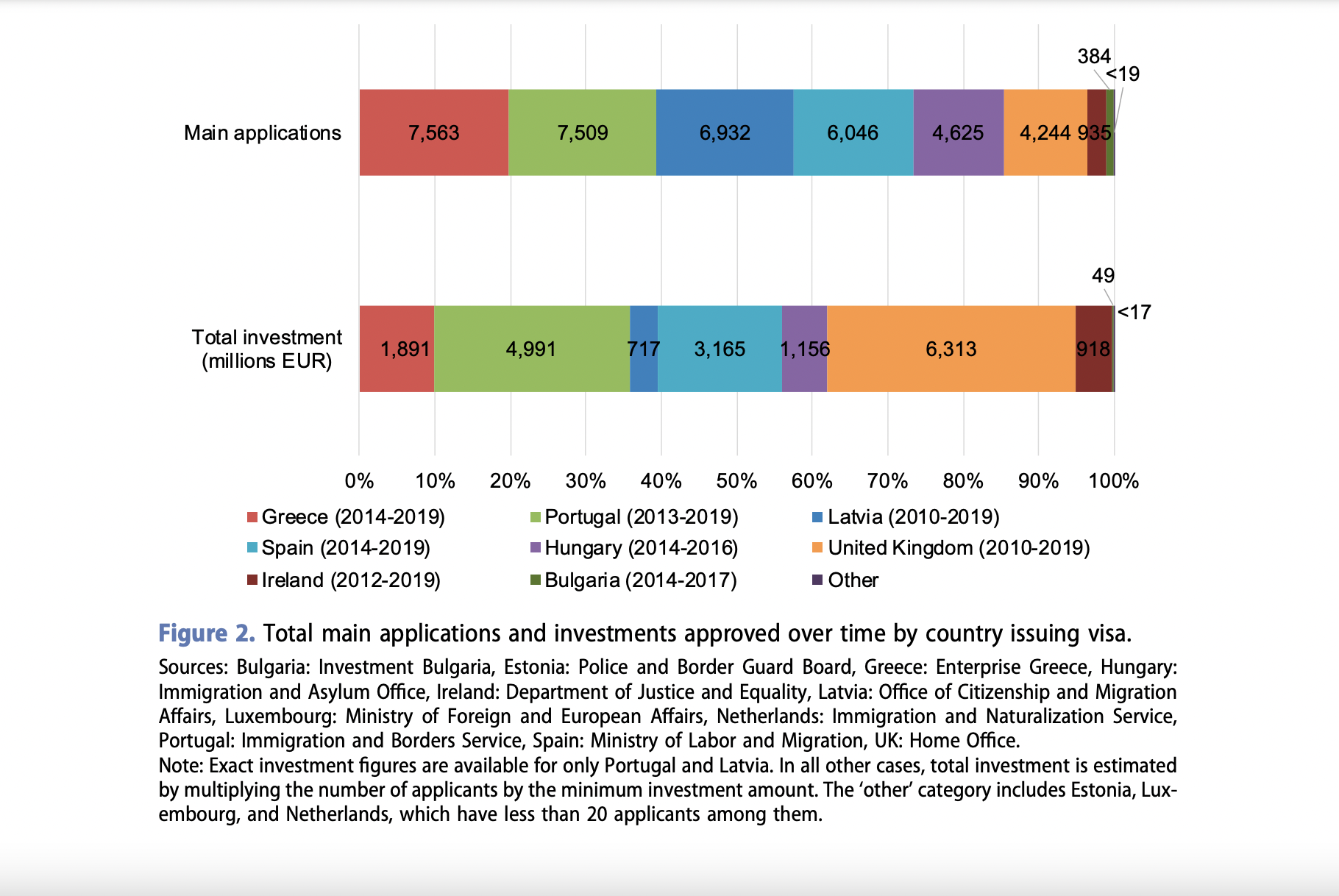 In their research, Surak-Tzusuki estimate that since 2014, the “golden programmes” have been generating an average of €3 billion per year in the European Union. The case of Great Britain is quite interesting. Its very high minimum investment threshold may have deterred many investors from applying for a Golden Visa there, but still, its revenues are by far the highest in Europe.

Surak and Tzusuki stated that those particular findings warrant further investigation of whether the property market is showing signs of destabilisation and where specifically locals have been priced out of housing.

In any case, the above data are indicative of a certain reality. The fact that more than 1/3 of the real estate transactions in Greece are transactions concerning Golden Visas, shows the considerable degree of dependence of the former on this investment logic. We could easily conclude that Golden Visa investments are a decisive factor in the developments in the real estate market and in the increase in property prices that has been observed in recent years.

Concern about Greece and other similar cases has also been expressed in a European Parliament study published in 2021. The report suggests that “the situation in Greece shows that the investor’s permanent residence permit schemes have an impact on the real estate market, which is likely to affect access to housing in small countries and small markets”.

An analysis of 300 Golden Visa contracts regarding properties in the city centre of Athens between real estate companies and Chinese investors in 2017-2019, showed that the vast majority of properties were purchased at double or triple the respective objective property value. This effectively means that properties with an objective value of €50,000 and €100,000 were purchased by Chinese investors at a much higher price in order to reach the threshold of €250,000, probably exerting upward pressure on property prices.

2019, the golden year of the Greek Golden Visa programme

According to data by the Hellenic Statistical Authority (ELSTAT), property sales in Greece and Athens set a record in 2005, one year after the country hosted the Olympic Games. More than 215,000 property sales were recorded throughout the country, 69,000 of which concerned properties in the capital alone.

The number of real estate transactions decreased significantly in the following years, especially from 2008 onwards, during the years of the economic crisis. The upward trend resumed in 2014 and lasted until 2019. It seems that the Greek Golden Visa program, which launched in 2014, actually stimulated the real estate market, at least until the COVID-19 pandemic broke out.

The above data combined with the graph below give a clear picture of the developments that took place in the real estate market between 2014 and 2019. The increasing number of sales and purchases was met with an explosive increase in property prices. At the same time, the housing loan growth has remained consistently negative since 2010. This, according to a report by Alpha Bank, shows that the recovery noted in that period, took place not thanks to bank lending (i.e. it was a “credit-less recovery”) and is therefore linked to the attraction of foreign direct investment (FDI).

The same trend was confirmed by the annual real estate market overview 1  by Delfi Partners, which described the recovery as being “exogenous” 2 , as stated in Alkis Kafetzis’ article The changing housing landscape in Greece and “Generation Rent”. Similarly, the researchers Maloutas, Siatitsa, Balampanidis estimate that “75% of new transactions in the undervalued Greek real estate market involve foreign buyers”. 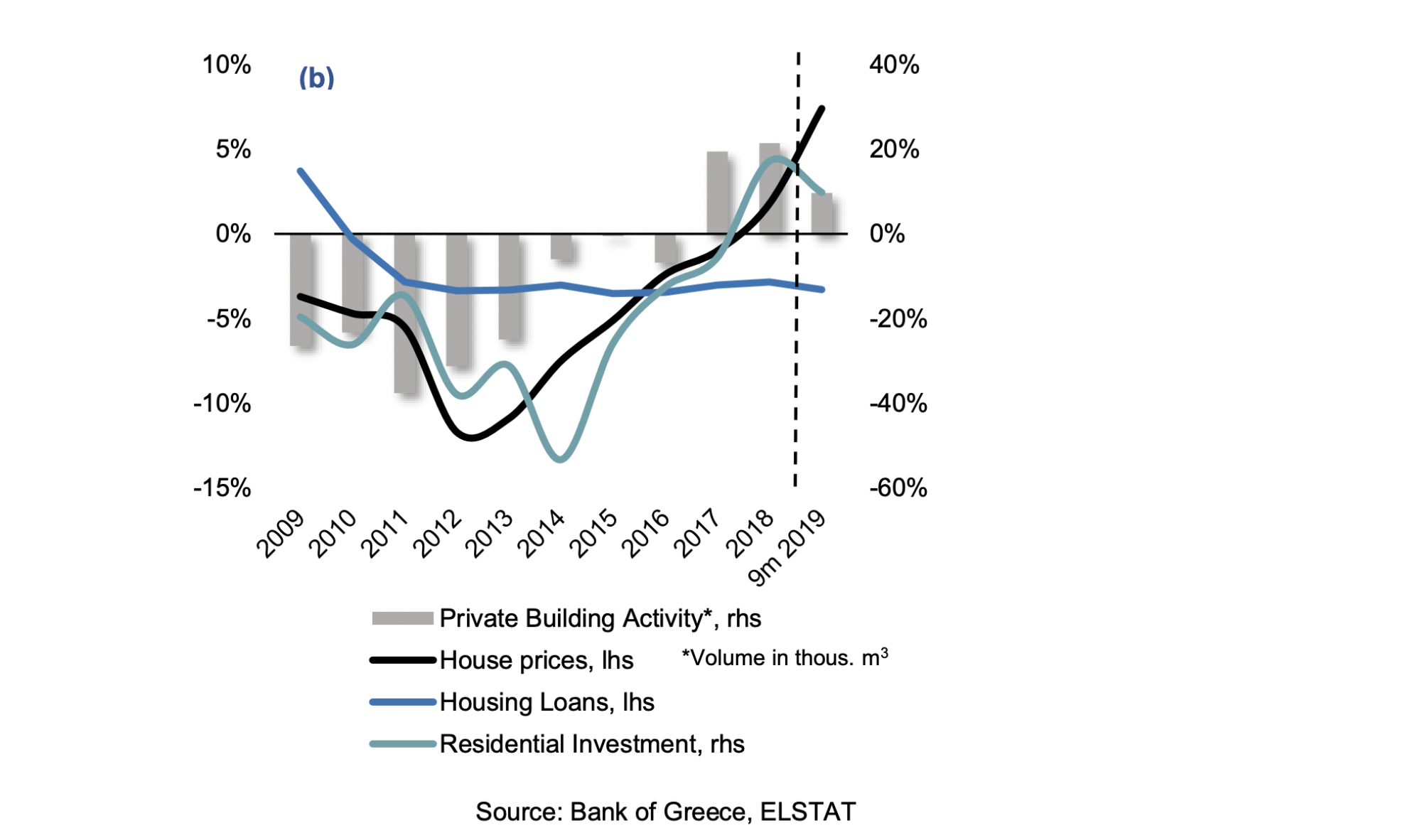 However, recent articles in the Greek Press indicate that COVID-19 “set the tombstone” for the programme. Indicatively, 2020 saw a -73.47% drop in new residence permits compared to 2019, which was the program’s most lucrative year, based on the available data (3,535 residence permits granted in 2019).

Data from the Ministry of Migration and Asylum show that by the end of 2021, Greece had approved a total of 9,619 residence permits to third-country nationals through this particular programme. 66% of the residence permits were granted to Chinese investors, who represent the vast majority of the applicants/ beneficiaries. They are followed by investors from Turkey (6%), Russia (5%), Lebanon (4%) and Egypt (3%).

In March 2022, the European Parliament demanded that the Commission abolish golden passports (CBI) and restrict golden residence permits (RBI) for Russian investors. As Dutch MEP Sophie in ‘t Veld commented, “These schemes only serve to provide a back door into the EU for shady individuals who cannot enter in broad daylight. It is time we closed that door, so that Russian oligarchs and other persons with dirty money stay out. Member state governments have refused to address the problem, claiming it was not an EU matter. Given what is currently happening, they cannot duck this issue anymore.”

Although the war in Ukraine has put the issue of golden programmes high on the agenda, this intervention by MEPs did not happen in a vacuum. In a European Parliament document published in May 2018, one reads: “Critics of this practice complain that golden visas are unfair, offering opportunities to the rich while denying them to those who can’t afford them”. They are also seen as a breeding ground for corruption and criminal acts because “second or third passports are useful tools for criminals, tax evaders and money launderers who need new identities and countries where they can escape.”

In Greece in February 2022, the Ministry of Migration and Asylum announced that it would suspend the issuance and renewal of investment residence permits for citizens of the Russian Federation.

Is increasing the investment threshold a solution?

In an article published on Eteron in late September this year, Alkis Kafetzis, coordinator of the “Sky-high Rents” project, referred to six key points that were missing from the government’s housing programme. Among other things, the article’s author wrote that at first glance, the measure to increase the investment threshold for obtaining a Golden Visa shows that there is an acknowledgement of the adverse impact of these investment schemes on the housing market.

However, he commented that increasing the threshold without applying any other criteria may prove to be insufficient. “The reason is that given the considerable cash flow of third country citizens and the constant need to legalise income, raising the threshold may simply increase real estate purchases in our country, since the threshold functions cumulatively for such investments. This way, instead of buying one property worth 250,000 euros, one can buy two properties worth 250,000 euros each, thus aggravating the existing dysfunction of the real estate market”.

Earlier this year, researchers Siatitsa, Gyftopoulou, Balampanidis and Papatzani formulated a series of policy suggestions for the housing issue in Greece. Their policy proposal included:

A story published in Kathimerini in early October reports that, according to the newspaper’s sources, the €500,000 limit will apply without exception in the city centre of Athens and in Thessaloniki, while it’s still uncertain what the case will be in the rest of the country.

In the same article, Panos Rozakis, head of Synergy Residence, commented that this measure will essentially put upward pressure on other districts, thus leading to an increase in rents and therefore “ultimately achieving the opposite of the intended result”.

Housing360 ° | A depiction of the housing issue in Greece

Policy Paper: For the right to affordable rental housing